Blue Green Canada is an unlikely alliance of labour unions and environmental groups who learned that there was much to be gained by working together rather than at odds. 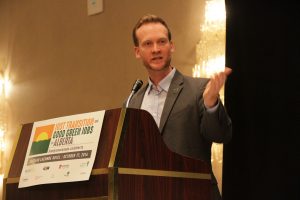 Speaking at the BlueGreen Just Transition conference Dan Woynillowicz told the audience there was a staggering $325 billion in clean energy investment in the world in 2015 and that job growth was following suit. Photo David Dodge, GreenEnergyFutures.ca

Take the situation in Alberta right now. Alberta’s Climate Leadership plan aims to accelerate the shutting down of the province’s remaining coal plants. Instead, 30 per cent of Alberta’s electricity will come from renewable sources by 2030. This is not shocking news. It’s already happened in Ontario and continues to happen around the world as nations face the increasingly serious implications of carbon emissions on the planet.
Even China, long considered a carbon-producing goliath, is leading the way globally in terms of building clean energy and now turning away from coal-fired generation.

China leads the world in investment in renewable energy, but they are also starting to pivot away from coal.

“Earlier this year, the government ordered 13 provinces to suspend approvals of new coal-fired power plants. Another 15 provinces were ordered to delay new construction of projects that were already approved,” says Woynillowicz.

Renewable energy has long gone from being “boutique to big.” In 2015, more than $325 billion was invested in renewable energy around the world. Some of the world’s largest utilities and “some of the largest and most recognized companies, like Google and Coca Cola and Walmart, are procuring huge amounts of renewable energy,” says Woynillowicz.

Globally the jobs numbers are stunning. In the U.S. alone there are 220,000 solar jobs. 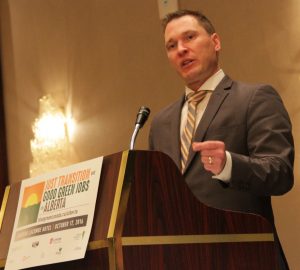 Back in Alberta Deron Bilous, the Minister of Economic Development and Trade, attached some numbers to Alberta’s transition goals. He told the Blue Green Just Transition conference that Alberta is looking for five gigawatts renewable electricity by 2030.

He says that’s going to attract about $10.5 billion of new investment, and create 7,200 new jobs for Albertans.

Even Saskatchewan, whose Premier, Brad Wall, is vehemently opposed to a carbon levy, has renewable energy ambitions. Within 15 years, Saskatchewan plans to get one half of its electricity from renewable sources.

In terms of business and jobs the efforts of these two provinces are “Going to create all kinds of opportunities both for renewable energy developers (and manufacturers),” says Woynillowicz.

This is all very exciting news for those interested in reducing pollution, diversifying the economy and creating new jobs. But lets not forget the 3,500 Albertans who work in the coal mining and generation industry. They form the “Blue” part of Blue Green Canada

Labour groups acknowledge climate change and know things have to change. However, they call for a “just transition” for affected workers.

What does it mean to be “just”? 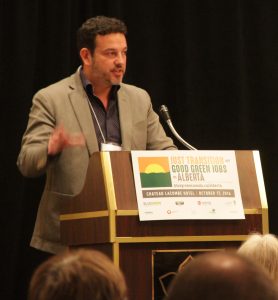 Gill McGowan of the Alberta Federation of Labour says “We’re talking about initiatives from the government that’s initiating these policies to ensure that the workers can make the transition most easily. So, things like training, retraining, bridging programs to make sure that their pensions are in tact.” Photo David Dodge, GreenEnergyFutures.ca

“Just Transition is the notion that workers who are affected by the transition from more polluting industries to a greener economy deserve special help in easing the transition,” said Gil McGowan, president of the Alberta Federation of Labour at the Blue Green Just Transition conference.

“We want people to understand that this transition will negatively affect real people with real jobs and real families in real communities.”

Alberta’s government has pledged $3.4 billion to reduce the carbon levy’s impacts on low-income Albertans and the small business community. This will also help Alberta’s workers and businesses transition from coal.

McGowan and labour unions formed the Coal Transition Coalition and took it on the road to the six communities in Alberta that will be most affected by the coal phase out. They also looked at other jurisdictions in the world to find examples of “just transitions” elsewhere.

“What we heard, first and foremost, was a lot of anxiety,” and even “hostility” says McGowan. Not all workers were aware it was the Conservative government of Prime Minister Stephen Harper “that didn’t consult the public” and enshrined in law the phase out of 12 of Alberta’s 18 coal-fired electricity generation units.

“What we said to the members when we met with them was that at the very least, we have a government that’s willing to consult,” said McGowan of Alberta’s new NDP government.

[the government] said they’re going to set aside more than $200 million to help fund the transition. It’s not yet clear how that money will be spent, but they did mention in their report things like training and retraining as legitimate ways to spend the money.”

Still, coal workers are anxious to say the least and they are looking for some certainty in a very uncertain future. 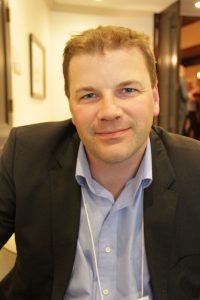 Meanwhile the unions haven’t just been passively awaiting the future. Scott Crichton of IBEW says a union-supported solar training program has trained more than 1,200 electricians in one to five-day solar training courses since 2008.

“What impresses me the most is the enthusiasm our members have for this,” says Crichton. “They’re not necessarily doing it to increase their employment opportunities. They’re doing it because they want to put it on their own homes. They want to try something different. There’s a thirst, there’s a hunger for this.”

Crichton argues that while offering job training is important, consultation is critical. He says contractors should have a say so the most in-demand training is offered. He says they’re ready to customize programs to meet demands for workers in the marketplace.

The Coal Transition Coalition has even proposed two of the newer coal plants could be updated to reduce emissions and grandfather them. Repurposing coal plants is not something we’ve heard much about in Alberta. The province desperately needs deep emission reductions. However, it’s not unheard of. In Ontario at least one coal plant was retrofitted to biomass.

It seems Alberta is serious about tackling its nationally significant carbon emissions. Opportunity and diversification are in the wind, but workers want to ensure the transition is “just.” Time will tell.